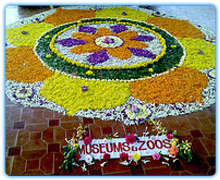 Onam, the harvest festival is the most popular festival of Kerala. A festival that celebrates a happy blend of myth and reality, Onam is part of the cultural repertoire of every Malayalee.
It brings back nostalgic memories, carried on the wings of folklore, of a bygone Utopian era of prosperity, equality and righteousness, under the golden reign of Mahabali. Year after year, for centuries, the people of Kerala, irrespective of caste, creed or colour, join together to welcome back their vanquished king. The ten-day Onam festival falls in August-September, coinciding with the beginning of the harvest season.

Pooram Festival
Every temple in Kerala celebrates festive occasions with religious devotion and joy. One of the most important temples in Kerala is the Vadakkananthan Temple at Thrissur. The Thrissur Pooram or Temple Festival of the Vadakkananthan Temple, is the grandest Temple Festival in Kerala. Travel to Kerala to see the magnificent Thrissur Pooram, on Kerala tours with Kerala Backwater, and see Kerala at its celebratory best. See the rows of impressive elephants bearing idols of the gods on their backs, decorated with golden forehead ornaments and colorful parasols in Thrissur Kerala.
Held every year in the month of Medom according to the Malayam calendar, which corresponds to April-May, the Thrissur Temple Festival features rituals and prayers as well as a spectaulcr procession of grandly decorated elephants. Neighboring temples at Thiruvambadi and Paramekkavu compete with each other to display the most impressive tuskers, the best decorated elephants and the most impressive fireworks. Fifteen elephants from each temple line up in an impressive standoff, while accompanying drummers and musicians play their instruments in a religious frenzy. 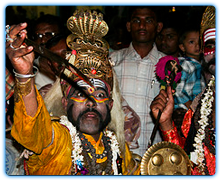 Started by Sakthan Thampuran, the Maharaja of the earlier state of Kochi state, the Thrissur Pooram or Temple Festival at Thrissur has become an annual event on the tourist calendar of Kerala. The two competing temples display new decorations and parasols on the elephants each year and put up more spectacular fireworks in order to create a memorable temple festival. The temple festival begins early in the morning with the procession of the elephants and lasts through the day and into the night. The percussion drumming called Panchavadyam is another highlight of the temple festival, which concludes on the following morning. This spectacle is the end of an eight-day festival of nine temples in Thrissur. 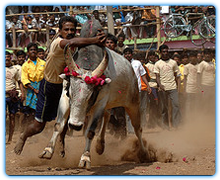 Nehru Trophy Boat Race, the annual water carnival at Punnamada Lake in Alappuzha is considered as the biggest snake boat race in the world. The colourful boat pageantry, which precedes the boat race, is a marvelous treat to the onlookers. The snake boats with 100 to 120 oarsmen plough the waters to the tune of the legendary songs. Jawaharlal Nehru who was enthralled by the charm and gaiety of the water carnival instituted the Nehru Trophy. This boat race attracts a large number of tourists.
Nehru Trophy Boat Race is the most famous of the boat races of Kerala. This annual regatta is held on the Punnamada Backwaters of Alappuzha district on the second Saturday of August.
The event is a commemoration of the visit to this place by the late Prime Minister of India, Jawaharlal Nehru, in 1952.
The spectacular race features magnificent snake boats or 'Chundans'. The boisterous and rhythmic boat songs or Vanchipattu work the spectators to a state of frenzy. 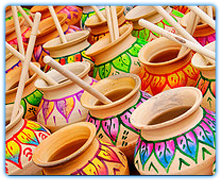 India is bestowed with the bliss of festivity. A major segment of the population here depends on agriculture. As a result, most of the festivals are also related to the agricultural activities of the people. These festivals are celebrated with different names and rituals in almost all the parts of India. Pongal is one of such highly revered festivals celebrated in Tamil Nadu to mark the harvesting of crops by farmers. Held in the middle of January, it is the time when the people get ready to thank God, Earth and their Cattle for the wonderful harvest and celebrate the occasion with joyous festivities and rituals.
The four-day Harvest festival is celebrated all over the state in January. The festival begins on the last day of the Tamil month with Bhogi Pongal followed by Surya.

Mahabalipuram Dance Festival
The internationally acclaimed and globally renowned "Mahabalipuram Dance Festival" is organized by the Department of Tourism, every year in Mahabalipuram - the renowned and ancient 7th century centre for Pallava culture and arts.
The Dance festival starts on the 25th of December every year and is conducted on all Saturdays and Government holidays, upto February first week. Dancers and musicians of repute from India and abroad thrill the crowds every year. Folk dances of India are an added attraction. Sit before an open-air 'stage' created 13 centuries ago, the incredible monolithic rock sculptures of the Pallavas, next to the sea in this ancient city of Mahabalipuram. Lovers of dance will be treated to a very unique and unforgettably aesthetic event: Bharadanatyam, Kuchipudi, Kathakali and Odissi, presented by the very best exponents of the art besides folk dances. 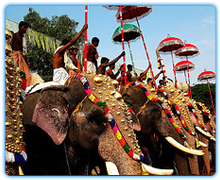 On the 4th day, Kanya Pongal, coloured balls of the Pongal are made and are offered to birds. A kind of bull-fight, called the 'Jallikattu' is held in Madurai, Tiruchirapalli and Tanjore in Tamil Nadu and several places in Andhra Pradesh. Bundles containing money are tied to the horns of ferocious bulls, and unarmed villagers try to wrest the bundles from them. Bullock cart races and cock-fights are also held. In Andhra Pradesh, every household displays its collection of dolls for three days. Community meals are held at night with freshly harvested ingredients.
Ballads, folk dances, dramas and songs have rich cultural heritages, 'Jallikattu' or bull fight' played in Madurai, Trichy areas are more ferocious than the bull fight which is the beloved sport of Latin speakers in Europe and South America.
Myths and legends, festivals and ceremonials have helped to fashion an exquisitely charming type of handicrafts. The products of Tamilnadu workmen cater to as much beauty as to utility, which include metal-ware, wood carving, pottery, leather goods, carpets, pith work, palam left products, etc. handloom textiles both cotton and silk have won global appreciation.

Natyanjali Dance Festival
Starts from the day of Mahashivaratri, for 5 days. Chidambaram is situated along the Pricesof the Bay of Bengal, 75 kms south of Pondicherry. Lord Nataraja, according to the Hindu mythology is a cosmic dancer. He is called the Lord of dances. This is an opportunity for all dancers, from all India, to perform and to pay their tribute to Lord Nataraja. The Natyanjali festival, which brings all the prominent dancers of India, together on the same platform, opens on the auspicious occasion of Mahashivaratri, in the month of February. It is performed at the 'Prakara' of the temple, and the dancers, full of intense bliss and devotion, with their evocative abhinaya, offers their dance to the great divinity, Lord Nataraja. Festivals have great value in Chidambaram. The Natyanjali festival dedicated to the Cosmic Dancer (Lord Shiva) is celebrated every year during February-March. Lord Nataraja, according to Hindu mythology is the cosmic dancer. He is also called "the Lord of Dances".
Natyanjali festival is designed to promote a universal message of 'Unity in Diversity' conveyed in the universal language of music and dance. 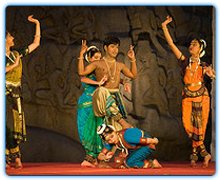 Hoysala Mahotsava is a dance festival held at the magnificent temples of Belur and Halebid in Karnataka in the month of March. The majestic Hoysala temples with their marvelous sculptures make a perfect venue for this cultural festival. The splendid event recreates the grandeur of the bygone era.

Hampi / Vijaynagar Festival
The festival is organized annually in November-December in the magnificent ruined city of Hampi, which was once the capital of the Vijaynagar empire. Hosted by the State Government, the city comes to life during the lively festival, which includes dance, drama, music, fireworks, puppet shows, and marvelous processions.

Dussehra
A ten-day festivity, the festival of Dussehra is symbolic of the victory of good over evil. The festival is celebrated with pomp and gaiety in Mysore and the city is transformed into a paradise with illuminated streets and arches. The highlights of the celebration are cultural programmes, exhibitions, music festivals, torchlight processions that culminates with a grand procession on the tenth day headed by a caparisoned elephant.

Kambala (Buffalo Race)
The historically famous Kambala race is held annually between November to March in Baradi Beedu, Bolantur, Kolatta Majalu, Bajagoli, Puttur, Kamalakatte and Uppinangadi.A rural sport in southern coastal Karnataka originally began as a royal pastime and was later continued by the feudal lords of the Tulu region.