The people of Rajasthan celebrate every festival with tremendous amount of zeal and enthusiasm. In addition to the colorful festivals, there are also traditional fairs including camel fair, religious fairs in Rajasthan and fair that mark the changing season. These fairs of Rajasthan provide a perfect opportunity to take a glimpse of the local lifestyle and shop for handcrafted items in Rajasthan.

In fact, celebrations occur almost round the year and are a splendid opportunity for tourists to gain an insight into the life of the Rajasthan during their travel. Other than the traditional fairs, recently established festivals which involve elephants, camel races, dance and music have been specially organised for tourists. Among the better known fairs and festivals of Rajasthan are: 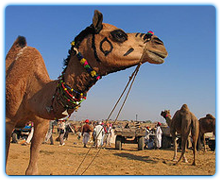 The well-known and marked with largest participation of all the festivals of Rajasthan, Pushkar is an important pilgrimage as well as the venue of a mammoth cattle fair. Bazaars, auctions, music and sports are highlight of this event.

Desert Festival, Jaisalmer (Jan-Feb.):
One of the most popular among the festivals of Rajasthan, the Jaisalmer Desert festival is a journey into the heart of the Rajasthan desert, the golden city of Jaisalmer. A true show on the sands which attracts even the much traveled visitor. Folk performers like musicians, ballad singers, snake charmers, and puppeteers all exhibit their traditional skills. There are exciting camel dances, camel acrobatics, camel races, and camel polo, competitions for the best decorated camel, tug-of-war between musclemen, a turban tying competition and a Mr. Desert contest. The culmination is a sound and light spectacle on a moonlit night amidst sand dunes. 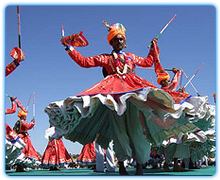 A festival to celebrate Holi, this is a great occasion for the visitor to watch several elephant sports and also play this festival of colours. A show is organised with the elephants turning out in their best finery. Gangaur Festival (March-April): A festival devoted to Goddess Parvati, the consort of Lord Shiva. It is time for young girls to dress up in their finery and pray for grooms of their choice while the married women pray for the well-being of their husbands. This 18-day festival is laced with various activities and culminates in a grand procession marking the arrival of Shiva to escort his bride home.

Marwar Festival, Jodhpur (October):
A festival devoted mainly to the music and dance of the Marwar region. This is a festival that allows the visitor to understand and enjoy the folk traditions of this part of the state. Organized by the Department of Tourism, Government of Rajasthan, the Marwar Festival was originally known as the Maand Festival. Maand is a classical style of folk music centered on the romantic life style of Rajasthan's rulers, and Maand Raag recreates the old world charm and graceful dances of the desert. A must for those interested in folk music during their holidays in Rajasthan. 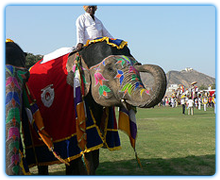 An enchanting desert city which comes alive with music and dance during the famed Camel Festival of Bikaner. It is fast gaining popularity as the visitor finds an opportunity to see some unusual folk performances, camel, race camel dance etc.

Teej Festival, Jaipur (July-August):
A festival to mark the advent of monsoon. Processions, women dressed in bright colours and a lot of merriment prevails during Teej. Essentially a women's festival, it is interesting to watch them enjoying in groups and at various bazaars where they turn up to shop in all their finery. 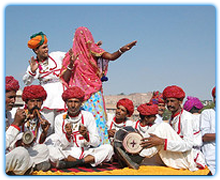 Essentially an animal fair, it provides an opportunity to participate in some of the local sports. Situated half way between Bikaner and Jodhpur, Nagaur awakens with the thronging of cattle, horses and camels accompanied by their colorfully turbaned owners. There is earnest bargaining between owners and buyers, and plenty of fun and festivity. Games, tug-of-war contests, camel races and strains of ballads create a joyful atmosphere with the setting sun in the background.

Baneshwar Fair, Baneshwar (Jan-Feb.):
A religious festival with simple and traditional rituals. This fair is the centre of attraction of a large number of tribals from the neighboring states of Madhya Pradesh and Gujarat who join their brethren from Rajasthan in offering prayers to Lord Shiva. 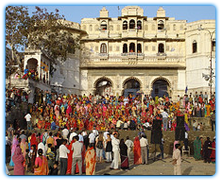 A festival to welcome the spring season. There is song, dance, processions, devotional music and fireworks where almost everybody participates. Not to be missed during your Rajasthan tour and travel.

Urs Ajmer Sharif, Ajmer (According to Lunar Calendar):
Held in the memory of the revered Sufi Saint Khawaja Moinuddin Chisti, it is an occasion for thousands of believers to congregate at the shrine and offer their prayers. All of Ajmer seems to take on a festive air and several programmes are organised to mark the festival.

Summer Festival, Mount Abu (June):
Organised in the only hill station of Rajasthan, this is the coldest place at this time of the year. Folk dances and a general atmosphere of gaiety prevails in this tiny hill resort and the tourist has ample time to relax and enjoy himself.