Delhi is the fusion of eight former capitals under different rulers of India. The centre of Indian politics and now a throbbing metropolis, Delhi has all you're looking for — flamboyant restaurants and nightclubs, haute couture boulevards, upmarket shopping malls, polo grounds, imperial gardens and... The historic architecture of Delhi is one of its main tourist attractions. The majestic Red Fort, the towering Qutub Minar, the unique Jama Masjid and the Rashtrapati Bhavan are some of the most popular monuments visited by tourists. However, it is along the wayside, within bazaars and at almost every curve in Delhi, that there are fascinating ruins of tombs, palaces and mosques, unnamed and unmarked waiting to be explored. 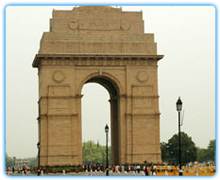 It is the war memorial dedicated to Indian soldiers, who died during World War I. The name of many soldiers who died during World War I is inscribed on its wall. Edward Lutyens, the man who planned and built New Delhi, designed India Gate. Almost every foreign tourist visits the monument. 'Amar Jawan Jyoti', the eternal flame is added later. The eternal flame runs on gas and is a tribute to soldiers who lost their lives in the service of the nation.

RED FORT:
Located in Old Delhi, the Red Fort or Lal Quila is a popular tourist attraction in Delhi. The fort was built by the Mughal emperor Shah Jahan in 1648, when he moved his capital from Agra to Delhi. The construction of the Fort started in 1638 and it was completed 10 years later in 1648. Some of the important spots inside the Red Fort include royal baths or shahi hamams, Shahi Burj, Moti Masjid or the Pearl Mosque, Diwan-e-Aam and Diwan-e-Khas. 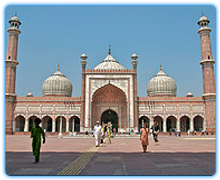 The largest mosque in India, the Jama Masjid was built by Shah Jahan 1656 AD. About 5,000 labourers and craftsmen worked for six years to complete the monument. The mosque can accommodate about 25,000 people. The mosque is located in the old Delhi. The domes are built in white marble. The prayer hall of the mosque has 260 pillars.

RAJGHAT
North-east of Feroz Shah Kotla, on the banks of the Yamuna, a simple square platform of black marble marks of the spot where Mahatma Gandhi was cremated following his assassination in 1948. A commemorative ceremony takes place each Friday, the day he was killed. The Raj Ghat area is now a beautiful park complete with labeled trees planted by a mixed bag of notables including Queen Eliabeth II, Gough Whitlam Dwight Eisenhower and Ho Chi Minn ! 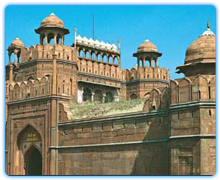 OLD FORT
Old Fort or Purana Quila as it is called is located near Pragati Maidan on the Mathura Road. You can club a visit to the Old Fort with your tour of Red Fort and Jama Masjid as the three monuments are located in Old Delhi and are not too far from one another. Humayun started the construction of the fort in 1533 AD, but before the completion of the fort, Sher Shah Suri defeated him and captured Delhi. Sher Shah Suri completed the fort and named it -Shergah. He added many structures to the fort, of which Qila-I-Kuhna Mosque and Sher Mandal are worth mentioning. In 1555, Humayun re-captured Delhi and converted Sher Mandal into a library.

HUMAYUN'S TOMB
Humayun's Tomb is mausoleum of the Mughal emperor Humayun. Bega Begum also known as Haji Begum, wife of Humayun constructed the mausoleum for her husband. The tomb was built between 1562 and 1572 AD. The tomb was designed by Mirak Mirza Ghiyuth. 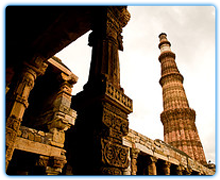 AKSHARDHAM TEMPLE
Swaminarayan Akshardham in New Delhi epitomizes 10,000 years of Indian culture in all its breathtaking grandeur, beauty, wisdom and bliss. It brilliantly showcases the essence of India’s ancient architecture, traditions and timeless spiritual messages. The Akshardham experience is an enlightening journey through India’s glorious art, values and contributions for the progress, happiness and harmony of mankind. 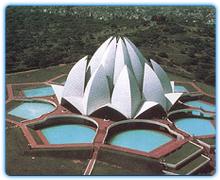 Lotus Temple is one of the remarkable architectures of Bahai faith. It is located at Kalkaji in New Delhi - 110059 The temple looks like a lotus flower and is made of marble, cement, dolomite and sand. The temple has no restrictions for visitors and is open to people from all religions. The place provides immaculate environment for meditation, peace and wisdom. The Bahai temple was completed in 1986.

LAXMI NARAYAN TEMPLE (Birla Mandir)
Laxmi Narayan Temple in Delhi, also known as Birla Mandir, was built by industrialist G. D. Birla and inaugurated in 1938 by Mahatma Gandhi. This is one of the first temples allowing entry to people of any faith, religion or cast for worship. The temple is constructed in Orissa style of architecture with red sandstone and white marble used at strategic places. The temple's presiding deities are Lakshmi-Narayan. Durga, Ganesha, Hanuman and Shiva are the other major deities gracing the place.

Location : Birla Mandir in Delhi is situated on Mandir Marg near Connaught Place and only 4 kms from New Delhi Railway Station.