Mumbai, which was previously known as Bombay is a major metro city of India. It is the state capital of Maharashtra. Mumbai is known as business capital of India. The city has the largest & busiest port handling India's foreign trade & a major international Airport. India’s largest Stock Exchange, which ranks as the third in the World. Description of the Mumbai can not be complete without the mention of “Bollywood”, the biggest Indian film industry. This city is famous for night – life & its culture. You can visit here the World famous ancient buildings. You can find the Mumbai city on the edge of Arabian Sea. The city is also a major attraction of tourist, have a major destination for Tourism. 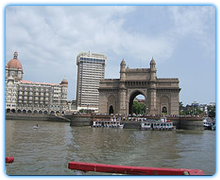 The Gateway of India was built to commemorate the visit of King George V and Queen Mary for the Delhi Durbar in 1911 when Delhi became capital of India. Situated at the Apollo Bunder, the gateway holds greater historical significance. The monument is complete with four turrets and intricate latticework carved into the yellow basalt stone.

Built in dedication to former British monarch King George V when he visited India at the beginning of the last century, the Gateway to India, like many other colonial relics, has been adopted by the independent India as its own and a powerful, sturdy icon of the city. Located right on the harbour front in southern Mumbai, many visitors end up here without planning to, so you will no doubt see it during a trip here. This is also the departure point for numerous ferries. 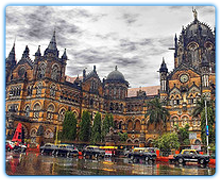 More a railway station than a tourist attraction, formerly known as the Victoria terminus, this is perhaps one of the most splendid stations in the whole of Asia. The huge colonial structure is a UNESCO World Heritage site in the Venetian Gothic style dating back to 1888. It’s also a major departure and arrival point for train services to and from numerous Mumbai suburbs and destinations farther field.

HAJI ALI DARGARH
Fast closing on its 600-year birthday, this iconic mosque just off the Pricesof Worli has remained a significant Mumbai landmark for centuries. Thousands of people show up on Thursdays and Fridays for prayers but anyone of any faith is allowed into the complex. Vague plans have been floated around to raze the site to the ground and replace it with white marble as engineers say the current structure is too old and battered for renovation, so get here soon before it’s too late. 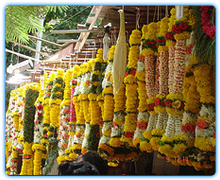 MANI BHAWAN
Mani Bhawan or Gandhi memorialis used to be the Mumbai residence of Mahatma Gandhi. It is from this famous house No. 19, called Mani Bhawan Gandhiji was arrested in 1932. This two storied building houses a reference library with over 2000 books, a photo feature on the Mahatma's life, some memorabilia, an old Gandhiji's charkha and a film and recording archive

PRINCE OF WALES MUSEUM
The Prince of Wales museum Was built in the year 1914, it is surrounded by beautiful landscapes forming an ideal getaway. The museum houses art, sculpture, rare coins, and old firearms and a priceless collection of miniature paintings. This museum is regarded as one of the best museums in the country.

MUMBA DEVI TEMPLE
Responsible for the new name when Bombay was officially dropped, Mumbadevi Temple is thought to be 2,000 years old, originally built by local fisherman. Located at Buleshwar, this is one of the city’s best-known temples. If you only go to one religious site other than the Elephanta Caves while in Mumbai, make it this one.

JUHU
Mumbai Nicknamed as the uptown bourgeois paradise, Juhu Beach is a place that attracts a large number of visitors throughout the year. Characterised by walkers, screaming children and courting couples, the beach covers an area of about 5 kilometres. Juhu beach is attractively studded with many five star hotels offering the customers a splendid view of the coast. The beach remains noticeably crowded on weekends. Moreover, the beach activities like camel rides, pony rides, acrobats, performing monkeys and entertainers will keep you enthralled all the time. Keep away from hawkers. 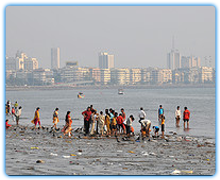 CHOWPATTY
Another sandy attraction of Mumbai is the Chowpatty beach in the suburbs of the city. Chowpatty is perhaps the most famous beach of Mumbai, flooded by the usual hustle and bustle of roadside vendors, screaming kids, Ferris wheels, pony rides, wayside astrologers, monkey shows, Moreover, the bhelpuri shops and sometimes the film shoot or a street play also adds to the festive atmosphere of the beach. 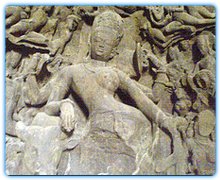 Elephanta Caves are located nine kms by sea from the Gateway of India, must visit place in every excursion itinerary. The Elephanta Caves are characterised by rock temples carved out of two hills that emerge from the centre of the island. At Elephanta sixth century built cave shrine to Lord Shiva, , and a massive three-headed sculpture representing Brahma the creator, Vishnu the preserver, and Shiva the destroyer.

LONAVLA
Located at a distance of 120 kms from Mumbai, Lonavla is a favourite hilly destination around Mumbai. Ideal for a day or weekend trip, Lonavla is beautiful and cool hill station. The waterfalls of Tungarly or trek up to the Duke's Nose (a gigantic hillock ) gives the complete feeling of being close to mother nature. 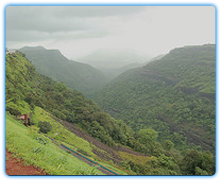 MATHERAN
Matheran is one of the nearest hill stations of Mumbai, Calm and undisturbed. It was discovered in 1850, it provides very nice view of the nearby places from the Hart point. A buggy is the main mode of transport in Matheran. Interestingly one thing that dominates the market is chikki, a confection made of gram flour, jaggery and cashew nut. Matheran has retained the tranquility and peace of a hill station by not allowing any kind of motor vehicle into the town.