Festivals in Ladakh are celebrated as the occasions for merry-making. These festivals provide people with ample opportunities to interact with each other, form new ties and renew the old ones.
Many of the annual festivals of the Gompas take place in winter, which is a relatively idle time for majority of the people. These take the form of dance-dramas in the gompa courtyards. Lamas, attired in colourful robes and wearing masks, perform mimes symbolising various aspects of the religion such as the progress of the individual soul and its purification or the triumph of good over evil. Local people flock from near and far to these events and the spiritual benefits they get are no doubt heightened by their enjoyment of the party atmosphere .
Ladakh Festival The blend of various cultures of Central Asian, Tibetan, Northern India are found in Ladakh. The duration of Ladakh festival is of 15 days i.e From the 1st to the 15th of September. Various sports such as polo and archery are conducted. Folk dances and songs, its age-old social And cultural ceremonies, its art and handicrafts, all come alive in a colorful kaleidoscope. 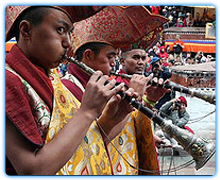 Hemis is the biggest and and the most popular festival in Ladakh. It is celebrated to commemorate the birth of Guru Padmasambhava who according to a legend fought with demons to save the people of Ladakh.

The Hemis Festival brings an opportunity for all the villagers and families to come together and socialise. Men can be seen wearing cummerbands while women are dressed in bright headgear and lots of jewellery. Brass trumpets, which are 3 metre in length, are played and the whole festive scene becomes a sight to behold. Travellers also stand good chances of interacting with rural people which is otherwise not possible.
The Hemis festival takes on an auspicious hue every 12 years in the Tibetan Year of the Monkey, when the two-storey high 'Thankga' depicting Padmasambhava is displayed. This famous Thankga, richly embroidered with pearls and semi-precious stones, on rich brightly colored silk, is due to be displayed next in AD 2016.

The Hemis Gompa becomes a hub of celebratory activities during the festival. The gompa, which is known to be the wealthiest and the biggest in Ladakh, also features the largest thangka in Ladakh. The Buddhist gompa remains divided into two main parts - the assembly hall on the right and the temple on the left. During the Hemis celebrations, the hall Dukhang becomes the greenroom of the dancers. The temple is locally known as Tshogkhang.

A colourful fair is also organised during the Hemis Festival and serves as a major attraction for tourists as well as locals. A range of handicrafts are put on sale during the exhibition and you can always find some wonderful souvenirs to take back home.
There are a number of other Buddhist festivals in Ladakh for you to join in. Each one of these has a special significance and has its own festive highlights. 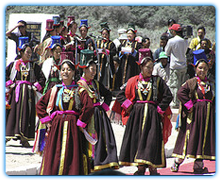 Dosmoche, the festival of the scapegoat, is celebrated with fervor at Leh. Falling in the second half of February, Dosmoche is one of two New Year festivals, the other being Losar. At Dosmoche, a great wooden mast decorated with streamers and religious emblems is et up outside Leh. At the appointed time, offerings of storma, ritual figures moulded out of dough, are brought out and ceremonially cast away into the desert, or burnt. These scapegoats carry away with them the evil spirits of the old year, and thus the town is cleansed and made ready to welcome the new year. Spituk, stok, thikse, chemrey and Matho all have their festivals in winter, between November and March. Likir and Deskit (Nubra )time their festivals to coincide with Dosmoche.

Losar
Losar -this spectacular festival celebrates the Ladakhi/Tibetan new year. Festivities last for 2 weeks during December or January,depending on the Lunar calander . All Ladakhi Buddhists celebrate it by making offerings to the gods, both in gompas and in their domestic shrines. The festival is marked with ancient rituals,the stage fights between good & evil, chanting and passing through the crowds with fire torches. The dance of the Ibex deer and the dramatic battles between the King & his ministers add to the joyous atmosphere. Full of music,dancing and merry-making ! This important festival changes location & dates every year. 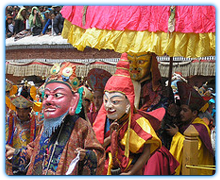 Sindhu Darshan Festival, as the name suggests, is a celebration of river Sindhu, also known as the Indus. People travel for a Darshan and Puja of the River Sindhu (Indus) which originates from the Mansarovar in Tibet. The Festival aims at projecting the Sindhu river as a symbol of multi-dimensional cultural identity, communal harmony and peaceful co-existence in India. Whilst promoting tourism in this area, this festival is also a symbolic salute to the brave soldiers of India who have valiantly fought the odds at Siachen, Kargil and other places.

It is also an opportunity for people from around the country and overseas to visit the beautiful regions of Leh and Ladakh. Celebrated first time in the year 1997, the festival is organised annually at Leh in the month of May-June by the Government of Jammu and Kashmir with the support of the Ministry of tourism and culture, Government of India. The festival is kaleidoscope of Indian culture and showcases an exciting array of performing arts being brought together at an exciting place. As part of the celebrations, various groups from different states in India bring water from the other mighty rivers in the country in earthen pots and immerse these pots in the Sindhu river, thereby mingling the river water with other waters of the land. 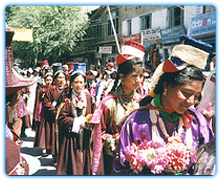 The festival usually starts from 1st september and lasts till sepftember 15th. It is a colourful celebration of the rich,cultural diversity of Ladakh's people. The weeks long festivities are held all over the region. Music, theatre, polo, archery,& wedding ceremonies,are performed daily along with mask and folk dances,with the final carnival parade passing through the streets of Leh. 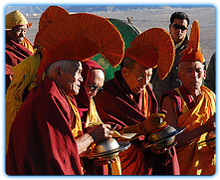 The monks of Stok and Spituk monasteries also celebrate Stok Gruru Tsechu for two days with mask dances performed. It is also held in Feb. around a week before the Matho Nagrang. During the festival two oracle appears, but they are laymen from the same village prepared by monks to receive the spirit of the deities.

Phyang Festival
Phyang Festival, ladakh Fairs & FestivalsPhyang Tsedup takes place in July / August. Like other monasteries, monks wearing colorful brocade robes and Mask in the form of different god and goddesses perform mask dances. The huge thanka of Skyoba Giksten Gonbo is hung in the courtyard during the festival. 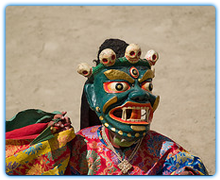 The 2-day festival takes place in July in Lamayuru monastery around 125 kms. from Leh. Monks like other monastic festival perform mask dances. During the festival monks perform prayer and rituals to get rid of disaster and peace in the world