There are two groups of islands – The andaman and Nicobar Islands in the Bay of Bengal, and the Lakshwadeep and Minicoy Islands in the Arabian Sea. The first is a group of 204 islands, believed to be extensions of the mountain system in the northeastern part of the country. Some of them are volcanic in origin.

The second group has about 43 islands, surrounded by beautiful coral reefs. The beauty of the andamans notwithstanding, their history is tainted with blood. Known as Kaala Paani, or black waters, Port Blair, the capital city of the andamans was the dreaded site of the Cellular Jail, used by the British for banished convicts 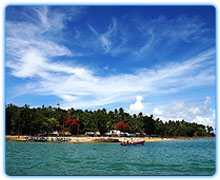 The Union Territory of Andaman & Nicobar Islands Stretches over a length of more than 700kms from North to south floating in the clear blue waters of Bay of Bengal, East of the Indian main land and consists of 572 emerald Islands (36 of which are inhabited), islets and rocks.

Since pre-historic times aboriginal tribes have lived on these Islands. The Andaman group is inhabited by tribes of Negrito origin, while the Nicobar Islands are inhabited by Mongloid stock.

The topography of the islands is hilly and they abound in evergreen forests. Timber is plentiful and of a vast variety. These undulating islands are covered with dense forests and endless variety of exotic flora and fauna.

Entry Formalities:
Indians:
Indian Nationals need no permit to visit Andamans. However, visiting tribal areas of Andaman and Nicobar Districts is prohibited. Permits to visit the tribal areas can be granted by the Deputy Commissioner, Andaman District, Port Blair in special cases on receipt of application in prescribed form.

Foreigners: Foreigners require a permit to stay in the islands, which can easily be obtained on arrival at Port Blair (either by Air or Sea) from the Immigration authorities for 30 days. This can be extended by 15 days with permission. In addition, permits can also be obtained from: Indian Mission Overseas, Foreigners Registration Offices at Delhi, Mumbai, Chennai, Kolkatta and the immigration authorities at the airports at Delhi, Mumbai Chennai and Kolkatta. 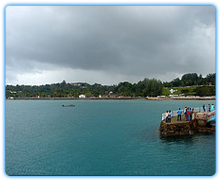 By Air: Port Blair is connected with Chennai and Calcutta. The journey time is approximately 2hrs. Presently, flights are operated by Indian Airlines (Flights operate on Daily basis expect on Tuesdays, Thursdays and Saturdays) Jet Airways (Flights operate from and to Chennai on Daily basis). By Sea: Regular passenger ship services are available to Port Blair from Chennai, Calcutta and Vishakapatnam. There are three to four sailings in a month from Calcutta and Chennai to Port Blair. There is a single sailing from Vishakapatnam once a month.

Lakshadweep Islands
Lakshadweep is not as renowned a destination as Goa or Kerala, but its lagoons and beaches are just as beautiful. The wealth of coral formations attracts a variety of tropical fish – angel, clown, butterfly, sturgeon, sweetlip, snappers and groupers. Kavaratti, which is the administrative capital of Lakshadweep, is located in the centre of the archipelago.
Its two most significant mosques are the Ajjara and Jamath Mosques, which are characterised by exquisite woodcarvings. The former in particular has a beautiful ceiling carved out of driftwood, which is the handiwork of local craftsmen.
The Aquarium at Kavaratti with tropical fish and corals, the Kavaratti Lake, and the splendid tombs it houses, are the other attractions of the place. 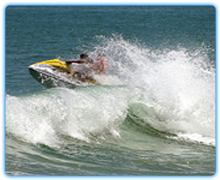 Kalpeni - Famous For Its Water Sports Those keen on water sports will enjoy visiting Kalpeni along with its three uninhabited satellite islands.
Surrounded by a lagoon rich in corals, Kalpeni offers excellent facilities for water sports such as snorkelling and diving. The coral remains on the eastern shores of the island are the remnants of a violent storm that took place in 1847. The main monument at Kalpeni is the Moidin Mosque that has walls made of coral. The best part of the Kalpeni Islands is that it is crime-free – women dress in wrap-around lungis (sarongs) and wear heavy gold jewellery without fear of being assaulted. While in the area, do not miss the two traditional dances of Kalpeni – Kolkali and Parichakkali – which illustrate themes drawn from folklore and religious legends to the accompaniment of music and song.

Minicoy Island
One of the most interesting islands in Lakshadweep is the Minicoy Island – not only, because it is the largest, but also because it is closer in language and culture to the Maldives.
While the rest of the archipelago speaks Malayalam, the lingua franca in Minicoy is Mahl. Mahl is written from right to left and is very similar to Dhivehi – the language of the Maldivians. Many of their customs are similar to those of the Maldives.
The people of Minicoy are a sea-faring community and have a closely-knit matrilineal society. In fact, the dominance of women led the famous explorer Marco Polo to dub Minicoy as a ‘female island.’ Minicoy is a picturesque island dotted with palm trees and enclosed with coral reefs. One of the most spectacular sights of Minicoy is a 50 metre tall Lighthouse, built by the British. 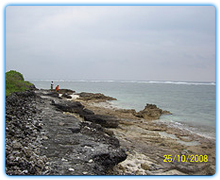 The Amindivi group consists of the Islands of Chetlat, Bitra, Kiltan, Kadmat and Amini.
Bitra, the smallest of the group is an ornithologist’s delight – it is heavily populated with birds and is a rich source of birds’ eggs. Kiltan is located on an ancient trade route – ships travelling from Aden often made a stopover at the Island en route to Colombo.
The densely populated Amini and Kadmat are rich in coconut palms and were occupied by the Portugese for a short while.
Kadmat is an island, nine kilometres long and only 200 metres in width. However it has a fine beach and a beautiful bay and is ideal for swimming and diving. 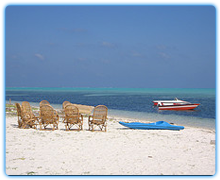 Finally, Lakshadweep boasts of the barren and desolate Pitti Island, comprising of a square-shaped reef with a sand bank at its southern end. Pitti Island is a vitally important nesting place for terns (a kind of sea swallow), and has been listed as a Wildlife Sanctuary. Terns are an endangered species and conservation groups are pressing for a ban on the planting of trees and the mining of coral – which they believe, threaten its habitat. However, the main threat to terns comes from anglers who collect terns’ eggs for food and disturb the birds’ natural habitat.

ENTRY FORMALITIES
Indians
All visitors to Lakhsdweep require entry permits from Lakshadweep administration. Out of 10 inhabited isalnd only 4 islands viz., Kalpani, Kavaratti, Minicoy, ad Kadmat have been opened for domestic tourists and SPORTS, a wing of Lakshadweep Administration is organising package tours by ship covering the above 4 islands from September to May every year and suspended during the monsoon period.

Foreign Tourists Foreign tourists are allowed to visit Bangaram island and Kadmat island only. They are not permitted to visit any other islands in Lakshadweep.

ACCESS
By Air: Indian Airlines connects Agatti Island, Lakshadweep's only airport, with Kochi on mainland. By Sea: Ship cruises are available as packages designed for the tourists. SPORTS (Society for Promotion of Recreational Tourism & Sports).