Hyderabad, the city of Charminar and capital of Andhra Pradesh, was founded by Quli Qutab Shah Modelled after Isfaan in Iran, the city was meant to be a symbol of the might of the Qutab Shahi rulers. When it was completed in 1592, the city received lavish praises from many visitors including Tavernier and Abbe Carr. Hyderabad is also the city of splendidly rich Nizams, the stories of whose hordes of gold, diamonds and pearls spread far and wide. 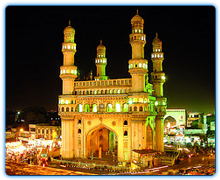 Situated in the heart of Hyderabad, the grand Charminar has four wide roads radiating in the four cardinal directions. The four minarets from miles can be seen. It is a square structure, each measuring 100 feet and a high central pointed arch. The Charminar has two galleries, one over other. The exterior of the Charminar is its most beautiful part, surrounded by a thriving market.

There are four magnificent arches known as Char Kaman situated near Charminar. They were the gateway to Zilu Khana or antechamber of the royal palace. The arches have been named Machli Kaman, Kali Kaman, Sher Gil Ki Kaman, and Charminar Ki Kaman.

HUSSAIN SAGAR LAKE
Built by Ibrahim Qutab Shah in 1550, the Hussain SagarLake is a large artificial lake lying between Hyderabad and Secunderabad. The lake was created in gratitude to Hussain Shah Wali, who had cured Ibrahim Qutab Shah of a disease. A huge statue of Lord Buddha has been put into the centre of the lake. 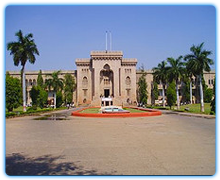 The Nawab’s collection of European art, glass and Chinese jade, ivory, porcelain, bronzes, illuminated manuscripts and jewelled weapons, including the Empress Noor Jehan’s bejewelled dagger and the Nawab’s own diamond-encrusted sword, is now housed in a big government building called the Salar Jung Museum. Today the museum is under a board set up by an Act of Parliament and housed in its own building.

OSMANIA UNIVERSITY
Hyderabad The University was established in the year 1918 and named after its founder, the then ruler of Hyderabad Nawab Sir Mir Osman Ali Khan Bahadur. Today, the university is one of the largest in India and attracts students not only from its home state but from all over the country and even abroad. 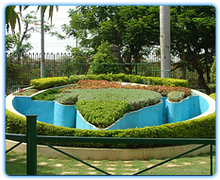 Located in Afjalgunj, It is considered as one of the best among the Indian manuscript libraries. The library was established in 1891 by Nawab Imad-ul-Mulk, Director of public institutions in Nizam’s Government.

NAUBAT PAHAD
Naubat Pahad is a hilltop tourist spot that gives superb views of Hyderabad. On the top of the hill is Birla Temple, B.M. Birla Science Centre, and the Archaeological Museum.