Day 01 : Arrive - Delhi
Arrive Delhi. Welcome at the Airport / Railway station in Delhi, our representatives assist and escort you by a private car and transfer to the pre-booked hotel. After your check in, you will be taking relax. If you want to go out you can take driver and car along with you and can visit around. overnight at the hotel. 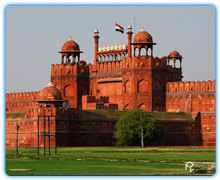 Morning after breakfast drive to Agra. Arrive and check in hotel. Later visit world’s most popular and beautiful monument : Taj Mahal with its’ fabulous view at the time of sunrise. Taj Mahal, beautiful architectural monument among the 7 wonders of the world; this historical masterpiece is illustration of the fusion of diverse architectural styles. Taj Mahal is crown of all the loveliest buildings in the world, a symbol of eternal love. The tour continues to visit Agra Fort,was built in 1576 AD., by great Mughal Emperor Akbar, structured and designed with red stoned barricaded; in the fort you will find most splendid Pearl Mosque and various other classic example of art : Jahangir Mahal, Moti Masjid, Macchhi Bhawan, Nagina Masjid, Diwan-i-Khas, Sheesh Mahal, Diwan-e-Am, Meena Bazaar and Musamman Bhurj where from Emperor Shahjahan, prisoner of his son rebellious Aurangzeb, he put his father in the cell of Agra fort, where from he could see his love reflecting through the Taj Mahal, where his loveliest wife was cremated. If time permits, visit the Tomb of Itamad-ud-Daula, 35 kms from Agra, built by Empress Noorjehan daughter of Shahjahan, this monument a tribute to her great father. In the evening one should visit Oswal Emporium to watch the replica of Taj Mahal it took 10 years for the artists to built this artistic epitome, also enjoy light and sound show “Mohabbat-the-Taj : the saga of love”, theonly show of its kind in India! Later return to the hotel for overnight stay.

Note : Taj Mahal is closed on every Friday. 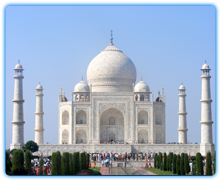 After leausire and breakafast check out the hotel and drive to Jaipur, En route visit Fathepur Sikri, Old deserted town of Mughal Dynasty –Fatehpur Sikri built in red sandstone in honor of Saint Salim Chisti who foretold the birth of 3 sons to Emperor Akbar, is an example of robust stability combined with originality. Each important edifice here represents a type by itself. Notable among them is the Diwan-e-Khas entirely unique in its concept is a tall vaulted room with an intricately carved central pillar and capital supporting a platform that once held the emperor's throne. The airy Panch Mahal a 5 storied structure rising in pyramidal fashion was probably used by the ladies of the court. Set like a jewel in a courtyard of pink sandstone is the finest building here, the marble Tomb of Salim Chisti enclosed by finely carved, lacy marble screens. The Buland Darwaza, an imposing gateway 54 m high was built to commemorate Akbar's Aligarh the famous university town is a center of Islamic studies. After sightseeing continue to drive to Jaipur, on arrival transfer to the hotel. After relaxing in the evening visit to Birla Temple, speculator white marble temple, glitters in the in the night, at the time of dinner visit to Chokhi Dhani - an ethnic 5 star resort serving Rajasthani & Continental cuisine with live music, astrology, games, folk dances and music, puppet shows in an ambiance of an ethnic village. Return to the hotel for overnight.

Day 04 : Jaipur
Today after breakfast explore the Pink City with an excursion to splendid Amber Fort, situated just outside the city, built in 15th Centaury by Rajput King Man Singh, later visit another mighty and majestic Nagargarh fort, which is nearby to Amber fort. Later drive back to the main city to visit imperial ‘City Palace’, a miraculous places to witness the real Rajasthani and Mughal architecture. Present residence of the royal family of Jaipur. Distinguishing Jantar Mantar innovated and constructed by Jaipur King Swai Jai Singh, he built 5 observatories, and Jantar Mantar in Jaipur is one of them. Visiting splendid Hawa Mahal, also known ‘Palace of Winds’ built with a concept for the woman of royal families to speculate the royal ceremonies and festivals being hidden from the public eyes. City palace houses both the monuments. In the evening you can explore the bustling market of Jaipur by cycle rickshaw ride, which is paradise for shopping lovers, Jaipur is worldly famous for hand woven carpet, precious stones, handicraft, marble, textile, blue pottery, handmade papers, later return to the hotel for overnight stay. 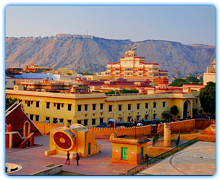 After breakfast, check out from the hotel and drive to Delhi. Arrive and transfer to Hotel. Later you will be going for shopping or spend time at Leisure. Overnight in Hotel.

Day 06 : Delhi – Departure
After breakfast will be visiting Old Delhi : (Shahajahanabad) Jama Masjid, the largest and most splendid mosque in India, both built by emperor Shah Jahan of Taj Mahal fame, Rajghat, memorial of Mahatma Gandhi, where he was cremated, Later in you opt to have Rickshaw ride past through the bustling Bazaar of in Chandani Chowk.

The sightseeing continue to explore the best tourist attractions of New Delhi include President House (Rashtrapati Bhawan), during the British rule this places was the residence of British Viceroys, India gate, this monument was built to honour and tribute to the Indian soldiers, sacrificed themselves during the Afghan war, then visiting Birla Mandir (Laxmi Narayan Temple) built by the one of the most richest industrialist Birla Family. Humayun’s Tomb, lotus shaped Bhai’s Temple, Qutub Minar, built by Qutub-ud-din Aibek of the Slave Dynasty; in the evening witness the light and sound show at Red fort. The show projects splendid history of 5000 years old city, a truly memorable experience. Later straight you will be transferred to Airport as per your flight timings.

Hotels with Breakfast at Each place (01 Room)

English Speaking Local Guides (One day at each place)

Assistance on arrivals and departures

Flight Udaipur/Delhi (As per current prices)

Entrance fees to the Monuments (Approx. 50 Per Person for the all places as per tour programme)

Anything extra which is not included in "Cost Includes"

Hotels are Subject to availability, In case any hotel is not available, will use similar category hotels. Costs are based on base category rooms, for higher categories, different rates shall be applicable. The driving hours given above from one city to another are based on the normal conditions of the roads. Any break for Food / Tea / Toilets / Sightseeing on the way will take extra time than the above given hours. During long weekends, Special holidays, Christmas, New years the above rates will not be applicable.Any strike, Any Government issue, Any breakdown, Accident on the roads, any unforeseen circumstances or anything which is beyond Global Indian Adventure’s or its staff’s or concerned agents, Global Indian Adventure shall not be responsible