Chennai, the capital of the state of Tamil Nadu, is one of the four major metropolitan in India. Till 1639 what was a small fishing village on the Pricesof the Bay of Bengal, is today the most peaceful and green metropolis in India. Chennai has numerous attractions including the beautiful Marina beach, where golden sands are kissed by the blue waters of the Bay of Bengal. The city has its share of forts and palaces reminding the tourists of its antiquity In earlier times, the city was a fishing community center and made the capital of the British residency in 1639. Classical form of dance, music,art and literature have all gained eminence from this place and spread to other parts of the country. In the present context, Chennai had evolved out to be a world class city with the merge of the ancient civilization,the colonial powers influence and the modern thinkers to create an industrial, IT savvy city of the 21st century. 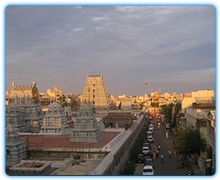 Constructed under the able leadership of the Pallava Kings of South India, the beautiful temple came to existence in the 16th century. Placed in the middle of the city, the temple is renowned for the attractive beauty of its archways or the gopuram. A whole locality can be seen of late sprung around the temple surroundings.

KAPALEESHWAR TEMPLE
The Kapaleeshwar Temple ably demonstrate the architectural skills of the Dravidian and was created in the 13th century. Situated in the malapore area of Chennai, the temple is the focal point of the local markets that operate in the evening hours and residential quaters have come around it. The entrance to the temple is painted with different colours with the puranic legends sculpted on the inner sanctorum facing to the east. 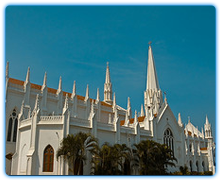 The Santhome Cathedral is built on the tomb of Apostle St Thomas who came to India from the Palestines and is one of the major pilgrimage center of the Christians. Erected by the Persian Christians, the Cathedral was refurbished in 1606 and turned into a cathedral. Later in the early 19th century it was reconstructed in the form of a basilica with a museum inside with a 16th century map of South Asia.

FORT ST. GEORGE
An important Fort during the pre independence period, it was built by Sir Day as the first real estate of the British rule in India. Created on the Pricesline of the bay of Bengal, the fort is endowed with a granite exterior finishing that houses the barracks for the British army along with a parade ground. The oldest church of Chennai, the St Mary’s Church is its neighbour. The fort was attacked many a times first by Daud Khan, general of Emperor Aurangzeb, in 1701, then by the Marathas in 1741 and by Hyder Ali in the late 18th century. Glimpses of early Chennai are still preserved in Clive Corner, Wellesley House, Fort Museum and St. Mary's church. 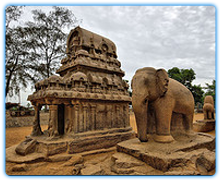 Extending from the St, George Fort to the Mahabalipuram, the Marina Beach offers a stunning look in the dusk. The sun set in the evening hours bring a lot of visitors to the beach. Thousands of beauty lovers gather at the beach and the snack stall, the ice creams and peanuts all adore the banks of the beach for the benefit of the peoples. Not the least, the parrot reader and the Tarot card fortune teller are seen at work in full command trying to change the fortune of peoples in just few minutes. To the south there is the ice house from where Vivekananda preached his philosophy and was earlier used to store massive ice blocks shipped from America.

NATIONAL ART GALLERY
Preserved in a splendid Indo- Saracenic buildings, the gallery was earlier called as Victoria Memorial Hall designed by Henry Irwin. According to the well known historian Tillotson it as one of the proudest expression of the Indo-Sarcenic movement. Exhibitions of paintings and sculptures, handicraft, metal ware, ivory carvings from 11th century are to be found in the corners of the museum. 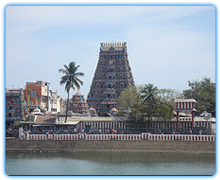 The Theosophical movement given birth by Madame Blavatsky and Col Olcott is head quatered in Adyar. The society is responsible for the revival of the Indian spiritual learning and the head office consists of a superb old building having a vast hall where complete silence is maintained during the praying hours. Nearby the huge edifice, there is a old Banyan tree believed to be the second largest in India. There is also a serene Garden of Remembrance and a fine Library with a collection of old manuscripts.

KANCHIPURAM
Kanchipuram - 65 kms from Mahabalipuram lies the magical city of a thousand temples, Kanchipuram. It has 650 stone inscriptions belonging to different dynasties. The temples here reveal the maturity and efflorescence of Pallava school of art. These were later added on by the ornate and imposing trappings later by the Chola, Chalukya and Vijayanagara dynasties. The the Kailasanatha temple, Ekambaranathar temple, Sri Varadaraja temple, Sri Vaikuntaperumal temple are just a few of the long list of architectural masterpieces. The city itself is devoted to the presiding deity, Sri Kamakshi at the Kamakshi temple. The word Kanchi in Sanskrit denotes girdle, and poets have metaphorically characterized the city as girdle to the earth. The latest fad from the city is the gold-embroidered Kanchipuram silk sari. Shops selling silk and cotton saris and material, are everywhere in the main street of the town. For a display of skills of the Kanchi weavers, do stopover at the Weaver’s Service Centre on Railway Station Road. 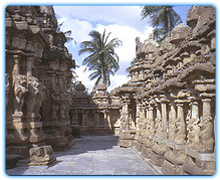 Mahabalipuram At 55 km from Chennai is the world-famous Mahabalipuram. The Pallava dynasty made this lovely coastal village their second capital. The place shaped under the creative forces between the fifth and eighth centuries. Today, the shore temple, Arjuna’s Penance, the biggest bas-relief in the world and the beautiful mandapams have become the identity of this sleepy town