Bangalore is one of the most popular metropolitan in southern India. This garden city of India, has a climate that makes it a pleasant place all through the year. Bangalore is also the capital of Karnataka. It is the seventh largest city in India. Taking a lead in the Information Technology boom in the country, Bangalore houses some of the most powerful MNC’s in the sector 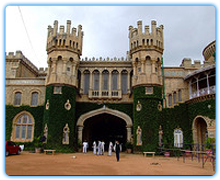 Bangalore Vidhan Soudha was constructed in the year 1954 and is one of the chief centres of attraction in Bangalore. The architecture of the building is inflenced by the neo Dravidian style and it currently houses the Legislative Assembly of Karnataka and a part of the secretariat.

CUBBON PARK
Situated in the centre of the Bangalore city, the Cubbon Park is worth a visit. The park, laid by Lord Cubbon in 1864, is spread over 300 acres. The layout of the park is absolutely exquisite. 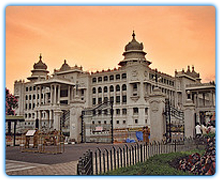 Lal Bagh is named after the wonderfully bloomed red roses that remain in bloom all through the year. The garden also possesses a collection of famous Botanical species. Though popular through out the year, the garden is in festive look during the Republic Day. The flower shows here also a special treat.

BANGALORE PALACE
Bangalore palace, built in 1887, is a must see in the city. The Palace’s architecture is based on the Tudor style. Situated in the centre of the Bangalore city, the palace covers an area of about 800 acres. The palace resembles the Windsor Palace of England.

VENKATAPPA ART GALLERY
Venkatappa art gallery, a treat for art lovers, has about 600 paintings displayed all through the year. The art gallery has some elite collections of scenic displays. 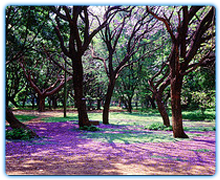 The fort and the palace of Tipu Sultan speak highly of the ruler ‘s lifestyle. The the layout, architecture,and the overall look of the monument gives a glimse of the ethnic Mughal lifestyle. The construction of palace was started by the first ruler of Mysore, Haider Ali and was completed by his famous son, Tipu Sultan himself.

ISKCON TEMPLE
The International Society for Krishna Consciousness (ISKCON) Temple Complex of Bangalore is a marvellous structure that blends the Dravidian and modern styles of architecture. The building has modern facilities like multi-vision cinema theatre, vedic library, computer aided presentation theatres and a preaching library. The temple offers accommodation facility for members as well as non-members.

SHIVA STATUE
A 65 feet high statue depicting Lord Shiva in a Padmashan or Lotus position, complete with Mount Kailash, heavenly abode of the god . The river Ganga is also shown flowing from matted locks of Shiva in the background. The entire area beautifully depicts the mythological legend related to it. 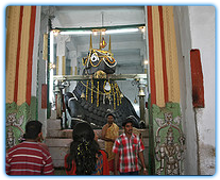 The Bull Temple devoted to Nandi the bull, Lord Shiva’s Vahana (vehicle). A huge colossal statue of the sitting bull draws numerous people to this place every day. The statue is 6 meters long and 4.5 meters tall and has been here long before the temple was built.

AQUARIUM
The sight of the Aquarium, the second largest in the country, is very fascinating. Built in a well planned manner, the Aquarium houses a good collection of of aquatic life. The Aquarium is closed on Mondays.